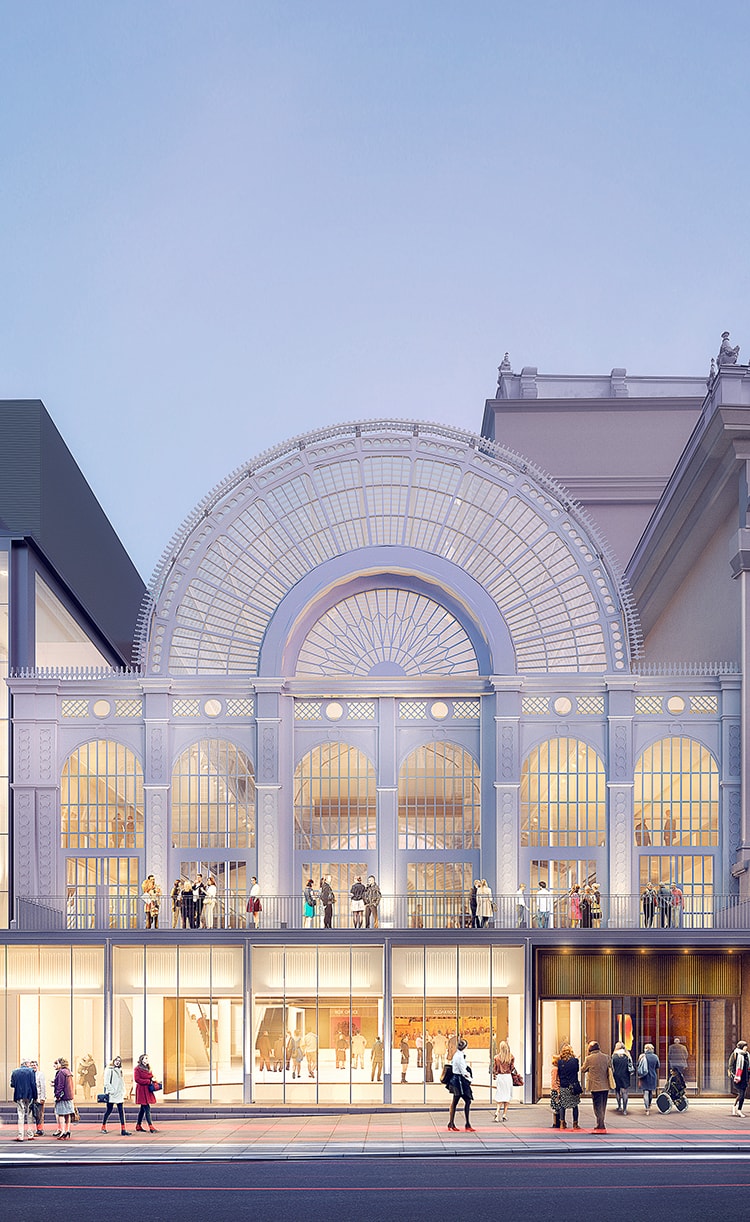 To enhance the experience of the Royal Opera House’s visitors, staff and artists alike, the architectural vision opens up the space below the historic Grade II listed cast-iron and glass façade along Bow Street, dating from the 1850s. Additional internal improvements include the design and installation of a three-story steelwork structure to replace the old Linbury Theatre balconies, and new steel support structure for the historic stone Grand Staircase to facilitate pedestrian flow. The existing basement was also extended beneath the façade using a new secant wall and terrace slab.

In addition to the usual project parameters, there were two key requirements:

Robert Bird Group was engaged, following rejection of proposals from the original consultant on the basis of cost, installation complexity, risk and operational disruption.

The cast-iron and glass façade was taken from the original 1858 Floral Hall following its damage by fire in 1956, and subsequently re-installed upon a new reinforced concrete frame constructed as part of major works in the 1990’s. The three intermediate columns of this frame were to be removed to provide a clear opening of about 15m width.

Due to the fragile nature of the historic façade, any structural solution had to achieve very tight and controlled movements to ensure the façade was not damaged during the load transfer from temporary props to the permanent support structure.

This proposition was made more complex by the absence of any reliable information on the load from the façade, and in the supporting columns.

RBG’s approach was to employ a load-balancing system of load-cells and flat-jacks combined with sophisticated movement monitoring within a construction methodology that controlled movement of the façade to within 2mm of its original position at all stages of the works.

A pair of 15.3m long steel trusses were installed either side of the existing concrete lintel beam supporting the historic façade. The trusses were designed to span between the retained outer piers and limited to 1.1m depth to provide sufficient clear height for the new foyer of the Linbury Theatre.

Through this load-balancing approach the transfer was made within +/-2mm overall movement envelope and 1mm between adjacent cast-iron columns.

Extensive historic research was undertaken to investigate the existent building condition prior to developing design and construction proposals.

The project scope required a new void space to be created below the stone steps of the Grand Staircase.
As this required the removal of the current structural support system (a historic mix of masonry walls and wrought-iron beams), RBG has provided a new steelwork support structure which spans between the main vertical masonry walls of the building.

The installation of this new support structure in confined spaced was carefully coordinated to make sure that the load path and stress limits for the historic stone treads were maintained at all times, especially as the staircase was fully operational during the construction stage.

A new steelwork balcony structure was to be placed within the existing three-story-high basement void and maintain strict acoustic and dynamic performance criteria specific to this type of building function and environment. This meant that all the connection points (e.g. column bases, lateral restraint supports) to the existing structure around the new theatre had to be provided with carefully tuned acoustic bearings.